As previously posted, I’ve now replaced my ageing NSLU2 with a raspberry pi. 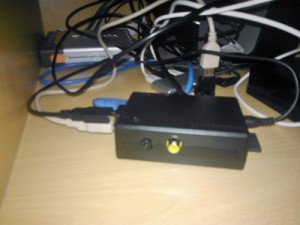 oh my… look at those wires!

Having finally set it all up, and now having a case from ModMyPi, it’s nearly complete.  I’ll be doing a write up of all the set up, much like I did for my NSLU2 Debian installation.  The Pi is already proving a much more powerful beast – heck it’s got much more than 29MB worth of memory!

So much so, that currently my Pi is running:

On the hardware side – I’ve got the following plugged in:

In the meantime, I think I might go and tidy up all those wires 😉